An MS in Communication Becomes a Path to Self-Discovery

As the youngest of six, Chris Block ’18 appreciates the fact that his parents were able to provide financial assistance to all of their children to get them through college. With three electrical engineers, a math teacher, and a physics teacher as siblings, Block felt a little out of place since he didn’t share those passions. 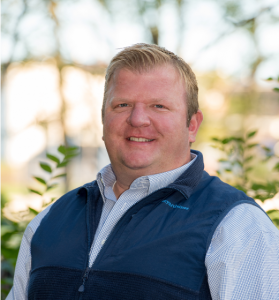 “If my parents were going to put me through school, I wanted to at least major in something that sounded good—like business. I loved creative writing, but I was too afraid to go into it,” he says.

After earning his undergraduate degree in economics from the University of Illinois at Urbana-Champaign, one of his brothers introduced him to a California business owner who had a job opening in technology sales. He took advantage of the opportunity and eventually grew into a field sales position there.

Labeled early on as a “talker,” Block loves interacting with people. This ability lent itself well to sales, making it easy for him to strike up conversations with strangers.

One day, after listening to a speech by Tom Mendoza, CEO of NetApp, Block felt something click. “Tom got up and said, ‘The reason I’m CEO is because I was the best speaker. I competed with many people, including the technical folks who built the product we sell, but they gave the job to me because I can communicate.’ That resonated with me because that’s what I did, too. I was looking at a guy who was a talker just like me. I realized I did have a skill. I was constantly studying things that people—and my career—told me to,” he says. “But, then, it hit me. Take control. Study something you’re passionate about.”

As he started investigating ways to captivate and energize an audience, he stumbled across Northwestern’s MS in Communication program. “I thought I wanted to be a better speaker,” he explains. “But this program talked about leadership, the science behind relationships, finding your gifts—and I realized I needed all of that, too.”

He applied and was accepted into the Custom Leadership Program, which allowed him to continue working and attend part time on Saturdays. Although his initial goal was to improve his speaking skills, he says he gained much more.

“Northwestern stripped me down to the basics,” explains Block. “I entered with a consumer mindset—wanting and expecting to become a better speaker. Instead, I began a self-awareness journey. What are my gifts? What am I passionate about? What does the world need, and how do I move toward finding the intersection of the two?”

Instead of focusing solely on speaking, his goals transformed: He wanted to become better at his job, open doors to new opportunities and leadership positions, and potentially start his own company to help people identify—and capitalize on—their natural gifts.

As an enterprise account manager for Hewlett Packard Enterprise (HPE), Block often found himself leading a diverse group. In this role, he needed to be able to motivate and encourage others to work together so he could address the needs of his customers.

“The Leading Collaboration course taught by Leslie DeChurch changed my leadership approach completely,” says Block. “When you lead people, she talked about the importance of finding out how they perceive their own identity. Let others live their identity. In other words, find out what they like to do and allow them to do it.”

The more he learned, the more confident he became that this approach might work at HPE. He had already tried divvying up work equally among staff members, as well as an “accountability” approach that held employees responsible for their defined roles. But nothing motivated employees and kept them happy in the ways he imagined. So he tried the approach he learned in class.

“Someone on my team likes speaking,” says Block. “I let him do more customer presentations, and now he is excited. Someone else likes to do meeting follow-ups, so I let him do that. I literally walked around and found out what people like to do. And let them do it.” The result: By working together, the team achieved 224% of its goal, selling $24 million.

“I’ve searched for fulfillment on my journey,” says Block. “I chased achievement, titles, and compensation. Going back to school and finding out there’s a home for me at Northwestern—education was the last place I thought I’d find peace of mind and fulfillment. But it was there. Communication has the power to unify and connect. Whether it involves your marriage, career, or something else, communication fixes all.”