Growing up, Jason DeSanto, senior lecturer at Northwestern University, enjoyed getting up in front of a classroom full of his peers. Part of the Illinois high school forensics circuit, he looked forward to the thrill of participating in organized public speaking events. 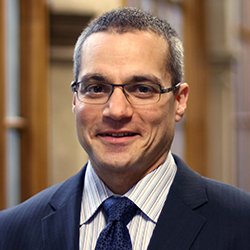 “I enjoyed the process of thinking about what allowed people to connect with each other,” he explains.

Attending Northwestern University and studying rhetoric as an undergraduate was a natural choice for him—and one that helped pinpoint specific areas of interest: law, political debates, and public policy speechwriting.

After graduating, he led communications for a U.S. Senate campaign. He was doing work he had dreamed about—but he also dreamed of something else. “I always thought becoming a practicing attorney would be exciting,” he says, so he returned to school to earn a JD and practiced law for more than a decade.

“I realized I used communication in my daily practice of law,” he says, “but also used it beyond that. I was still working on political campaigns, doing speechwriting, and debate coaching. While I was doing this, I was running on related yet parallel paths of law and advocacy.” For DeSanto, this brought to light the innate intersection of law, public policy, and communication.

Given this unique perspective, he jumped at the chance to teach students about freedom of expression and the First Amendment when he was asked to serve as an adjunct professor at Northwestern.

His passion for the subject—and the passion he instilled in students as a result—eventually led him to a full-time education role, where he teaches MS in Communication students while also serving as faculty for Northwestern’s Pritzker School of Law.

“In some ways, this was a return to things I’ve loved and had a passion for since I was young—and a return to things I had studied at Northwestern,” he says. “I was still doing consulting in the politics, business, and not-for-profit worlds, but now I was reinforcing it by working with students in the MS in Communication program.”

His popular Public Persuasion course—offered to Custom Leadership Program students—is an intensive workshop that showcases how to develop policy ideas, powerfully articulate them, and secure commitment and action. In other words, he helps future leaders become better public communicators in settings that range from leading meetings and giving speeches to producing internal memos.

His goal is to build conviction and connection among communicators. “When we ask people what they remember about the most impactful presentation or speech they’ve ever heard, they ordinarily identify someone who has passion—and who obviously cared about what they were talking about. They seem committed to us as audience members.”

Part of building that conviction and connection involves personal reflection. DeSanto’s class supports this through free writing and the use of prompts that encourage students to think about what it means to put convictions out into the world.

“In class, we think about the first thing we identify as broken—whether it’s within our workplace or somewhere else—and then how we might fix it,” he explains. “Spending time thinking about this helps you identify the real problem you want to solve, the possible solution, and your personal attachment to the problem.”

The next step involves thinking about what motivates and persuades others—and ways to break through to them. “We talk about the tools we have as writers or speakers to do this so students walk away with a set of highly portable skills to influence and motivate,” he says.

For Hybrid Leadership Program students, he also helps facilitate a Crisis Communication Management course by leading the Q&A portion of the class.

DeSanto’s lasting impact on the MS in Communication students is obvious: He’s one of the highest-rated lecturers at Northwestern, has received the Dean’s Teaching Award, and was voted to deliver the annual last Lecture by three consecutive Pritzker School of Law graduating classes.

“Teaching and learning are reciprocal,” he says. “David Zarefsky, professor emeritus, taught me that. Whatever enjoyment and knowledge students gain from my courses, they repay me beyond anything I could provide to them. Helping other people find the powerful communicator inside themselves has become an animating force in my life. I wouldn’t have it any other way.”