As Kate Harrington-Rosen ’19 studied at Montreal’s McGill University, her volunteer experience had as much of an impact on her professional life as her degrees in Hispanic Studies and Latin American/Caribbean Studies with a minor in Women’s Studies. 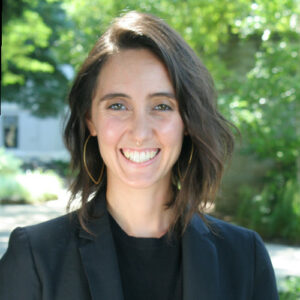 Volunteering for the on-campus, student-run Sexual Assault Resource Center, she received training to provide crisis management services and lead support groups for students and adults who had experienced sexual violence. By her senior year, Harrington-Rosen was co-running the center with a friend; together, they facilitated and managed all-volunteer recruitment and training.

After graduation, Harrington-Rosen moved to Portland to work with another Sexual Assault Resource Center as a crisis advocate, responding to hotline calls.

“Their office had a team that supported youth in the sex industry,” she explains. “Trafficking is a big issue in Portland because it’s on the I-5 corridor. I was doing direct case management and support with youth, including interventions on the ground. I was also doing practitioner training and working with colleagues, community partners, NGOs, and law enforcement to train folks on best practices. That became a theme for me: serving as a practitioner and a trainer.”

A move to Chicago in 2015 connected her with Chicago House, where she managed a workforce development program serving trans and gender-nonconforming adults. “That’s when I started turning up the notch on training and facilitation work,” she explains. “I was working closely with employers to train them on how to create a trans-inclusive workspace and navigate some of those practices.”

After her impact in the nonprofit world, Harrington-Rosen decided she wanted to work in an academic setting to see what kind of difference she could make there. Joining Northwestern’s Office of Equity, she was hired to train students, staff, and faculty on university policies and procedures about sexual misconduct, harassment, and discrimination.

“A lot of the work of communication is giving people new concepts, framework, and language to think about themselves, their own experiences, and the ways they hold power.”

Her thinking on diversity, equity, and inclusion aligns closely with scholar and educator Andrés Tapia, who talks about inclusion as a skill instead of an attitude. For Harrington-Rosen, communication serves as the link between these two things.

“Inclusion is a learned skill like any other,” she says. “I don’t know how to speak Spanish unless you teach me. I don’t know how to do geometry unless you teach me. Same with inclusion. A lot of the work of communication is giving people new concepts, framework, and language to think about themselves, their own experiences, and the ways they hold power. How do we help people understand themselves better and give them tools to engage in radically different ways?”

After beginning her Northwestern career, she realized she wanted to learn how to transition to having deeper conversations about a future where everyone feels respected, included, and valued. At the same time, she was also thinking about graduate school, identifying the MS in Communication’s Custom Leadership Program as a good fit.

“My career had been built around communicating to many stakeholders at once. Those are skills I adapted to organic settings and working directly with people in crisis. But, outside a training setting, I needed to figure out what was effective,” she says. “What I got from the program was this idea of moving from unconscious competence toward conscious competence.”

For Harrington-Rosen, it was extremely valuable to be able to understand why certain ways of communicating are more effective than others, giving her new language and context to build on her practices.

A week after she earned her degree, Harrington-Rosen was promoted to Northwestern’s director of equity outreach and education. She now oversees a department that trains more than 5,000 people every year on harassment, discrimination, and sexual violence prevention.

Outside the office, she’s also passionate about consulting. Several years ago, she built Praxis Group, which offers services to organizations that want to reach beyond the traditional ideas of inclusion. The firm focused on what she calls “cultural humility”: equipping people to think about what it looks like to have spaces rebuilt for queer and trans folks to support all genders, identities, and sexual orientation. As demand increased, the practice grew—and she stepped aside to pursue one-on-one consulting with clients.

“I think higher ed is a really interesting space to work on inclusion,” she says. “I’m also interested in what we can do in other types of spaces as a proving ground. What does it mean to do meaningful work and hold ourselves to very intentional standards?”