Building Confidence & Knowledge to Take on a New Career Challenge

Ivan Jaime ’20 believes in putting in hard work, no matter the situation. As he earned his diploma and went on to study marketing at the University of Texas at Austin, he was also working his way up at supermarket chain H-E-B. Starting out as a bagger, he had risen through the ranks to central checkout manager by the time he received his undergraduate degree in 2005. 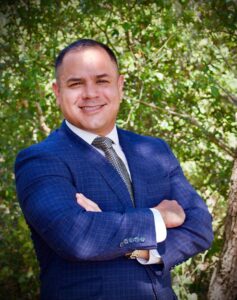 After graduation, he accepted a position with Union Pacific Railroad in yard operations management. Three years later, he got a call: The company was building a public affairs department and thought he’d be a good fit. He joined the brand new team in 2008 as the director of border policy and community affairs and spent 12 more years at the company.

“I initially started with a focus on community relations,” he says, “which eventually developed into legislative advocacy and lobbying.” While Jaime was developing corporate strategy for state and local government affairs, he also went through Union Pacific’s Leadership Development Program to prepare for future executive-level opportunities. The experience reminded him of how much he loved learning—and inspired him to continue his education.

As a minority, Jaime says he’s always thinking about his “yeah-buts,” as he calls them, when he’s striving to achieve new goals. “Studies have shown that women and underrepresented groups don’t always get opportunities based on potential. We get the ‘Yeah, you’re extremely qualified, but …’ responses. I’ve always tried to eliminate as many of those as possible. Getting my advanced degree was one way I could do that.”

“The team that hired me mentioned my education as proof that I’m a learner. They wanted someone who could learn quickly and hit the ground running.”

Working full time, Jaime was looking for a program that offered a hybrid approach: He didn’t want to attend all classes in person but also didn’t want a 100% online experience. “I looked for programs that were a mix of the two—and done in a cohort style—so I could become close with people. Northwestern’s MS in Communication was the best program for me.”

Instead of meeting in person the usual four times, his Hybrid Leadership Program cohort only met twice due to COVID-19. But that didn’t stop the group from developing lasting connections. “We’re so close,” he explains. “It felt like there was very special chemistry.”

Shortly after graduating from Northwestern, he accepted a job offer from Walmart: Jaime is now the company’s director of government and public affairs for Texas and Oklahoma, where he operates at the intersection of corporate strategy and public policy.

“I enjoy that mix where businesses are having to make decisions to improve their profitability in a way that serves the general public,” he says. “Often, those goals seem to be at odds with each other, but they’re really not.”

He says the program’s capstone experience helped him feel confident and prepared to take on this new career challenge. “My degree played a role in several ways. The team that hired me mentioned my education as proof that I’m a learner. They wanted someone who could learn quickly and hit the ground running. Through the program, I also got to know myself better and understood my value proposition. That was critical in helping me sell the skills I bring.”