How Communication is Helping Save Lives

Sam Wijeyakumar ’19 cares about education in a “hard-core way,” as she describes it. And for good reason: Education saved her life.

She was a good student but dropped out of high school in the mid-1990s, becoming a victim of human trafficking. Her tenacity won out; she eventually finished high school and began college in 2000 despite still being stuck in on-and-off trafficking. 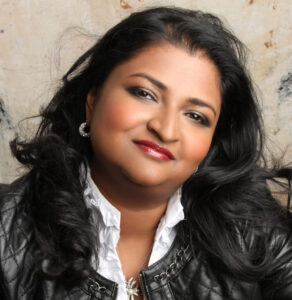 Fifteen years later, Wijeyakumar finally earned her hard-fought bachelor’s degree. By this time, she had also founded Rahab’s Daughters, a nonprofit dedicated to the fight against human trafficking. After achieving these goals, she knew she wanted to continue her education and earn a master’s degree…but worried she wouldn’t find the time or resources to make it happen.

“I wanted a graduate degree that would help with my nonprofit,” says Wijeyakumar, “but I didn’t want a program focused only on nonprofit management because I also work in digital transformation. I was looking for a program that would speak to both sides of my professional life.” At the time, she was working as a senior account executive for Liferay, an open-source software company.

After weighing her options, she applied to earn an MS in Communication at Northwestern. She knew the Custom Leadership Program curriculum would be diverse enough to support her goals. Shortly after being accepted, however, she deferred for two years to manage health issues and make sure funds were available for her daughter to attend college. Wijeyakumar returned to the program in 2018 to earn the degree while also taking care of her family, running her nonprofit, and working full time.

Managing two teams—one in the Midwest and one on the West Coast—she traveled four to six days a week through the duration of the program.

“Sometimes I’d fly home on Saturday morning, come straight to class, and then leave again,” she explains. “But I think people are the most important part of a graduate program, so I wanted to be in class where I could meet them.”

She says her cohort made the entire experience better. They created study groups to help maintain a semblance of work-life balance. Even after graduation, the groups still keep in touch.

“I came geared up for this program because it was going to help my nonprofit, but it helped everything. It helped me as a person. All avenues of my life got better. And when a leader gets better, everyone wins.”

“We all had busy and demanding jobs, but we always helped each other,” she says. “If one person was behind on the reading one week, then we’d catch them up. We worked together to make sure everyone was on top of everything. For our capstone projects, we all took the day off work and recorded each other’s videos.”

Shortly after earning her MS in Communication, Wijeyakumar landed a new job as vice president at Veriday, her previous employer’s software partner. “My degree definitely helped with that jump,” she says. “I still get to work with my old company and team, but I’m able to lead new product launches into the United States. Knowing I had the theory around persuasive communication and being able to put together eloquent communication plans, this degree helped my confidence. I knew I could handle the role.”

In addition to honing her leadership and change management skills, she says the program also taught her more about directing virtual teams. During the pandemic, these concepts have been put into practice more than she ever anticipated as she guides remote teams in strategy creation and decision-making.

As part of the program’s thesis, Wijeyakumar also got to conduct research on human trafficking. As a result, she’s now embarking on her PhD to learn more about data mining. “I studied how FOSTA-SESTA laws affected human-trafficking communication online,” she explains. “My research showed that the laws hadn’t helped—they simply took communication overseas and proliferated it in other directions.”

In the future, she hopes to use her newfound knowledge to internationalize Rahab’s Daughters. As the fastest growing crime in the world, human trafficking is a global issue—and a trillion-dollar industry.

“I came geared up for this program because it was going to help my nonprofit,” says Wijeyakumar, “but it helped everything. It helped me as a person. All avenues of my life got better. And when a leader gets better, everyone wins. If I hadn’t gotten an education, I’d probably be dead. I wouldn’t have been able to stand on my own two feet. I tell human trafficking survivors all the time: ‘They can take so much from you, but they cannot take your education. With that, you have the building blocks for a firm foundation to rebuild your life.’ ”