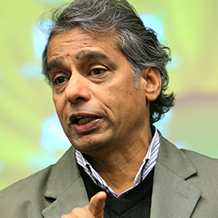 Dilip Gaonkar is Professor in Rhetoric and Public Culture and the Director of Center for Global Culture and Communication at Northwestern University. He is also the Director of Center for Transcultural Studies, an independent scholarly research network concerned with global issues. He was closely associated with the journal, Public Culture, serving as the Executive Editor (2000-2009) and as Editor (2009-2011). Gaonkar has two sets of scholarly interests: rhetoric as an intellectual tradition, both its ancient roots and its contemporary mutations; and, global modernities and their impact on the political. He has published numerous essays on rhetoric, including “The Idea of Rhetoric in the Rhetoric of Science” that was published along with ten critical responses to the essay in a book, Rhetorical Hermeneutics: Invention and Interpretation in the Age of Science, edited by Alan G. Gross and William Keith (1996). Gaonkar has edited a series books on global cultural politics: Globalizing American Studies (with Brian Edwards, 2010), Alternative Modernities (2001), and Disciplinarity and Dissent in Cultural Studies (1995). He has also edited several special issues of journals: Laclau’s On Populist Reason (with Robert Hariman, for Cultural Studies, 2012), Cultures of Democracy (for Public Culture, 2007), Commitments in a Post-Foundational World (with Keith Topper, 2005), Technologies of Public Persuasion (with Elizabeth Povinelli, 2003), and New Imaginaries (with Benjamin Lee, 2002). He is currently working on a book manuscript on Modernity, Democracy and the Politics of Disorder.

In addition to his work for the Department of Communications Studies, Gaonkar also serves as an adjunct faculty member in the Department of African American studies, the Department of Asian Languages and Cultures, the graduate program in Screen Cultures and as a senior affiliate fellow at the Center for the Study of Developing Societies in Delhi, India.

Strategy in the Global Economy

This course will discuss the issues (problems, challenges, and opportunities) arising from the confluence of commerce, culture and politics under the current regime of globalization. While there is more to globalization than economics (integration of markets and nances) and technology (mobility and connectivity within the knowledge based and information driven wired/wireless world), one has to begin by attending to the techno-economic forces transforming the world today. On the other hand, even though our world driven by technological innovations and economic imperatives it is rapidly globalizing, the cross- border differences—cultural, political and geographical—still matter a great deal. Paying attention to and leveraging those differences is critical for the success of any individual manager and also any corporation or nation now compelled to compete on the global stage. This is where strategy or global strategy becomes relevant. This course will explore, by way of case studies and theoretical reflection, how to identify, negotiate, and overcome/or utilize differences strategically. Please note that this is not a “business model” course, even though there will be ample use of corporate case studies.