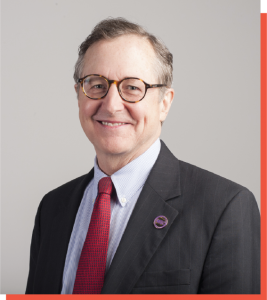 Bob Rowley is often introduced as “This is Bob Rowley, who spent a life in communication.” Bob Rowley is the Northwestern Assistant Vice President of Media Relations and a Medill School of Journalism lecturer. He spent 30 years working for the Chicago Tribune, was a White House correspondent, Pentagon correspondent, national correspondent based in Dallas, lived in Mexico covering Latin America, where his daughters were born, and in Toronto and Jerusalem, going back and forth covering a dozen wars and different kinds of stories. He has worked in higher education for about eight years, first at Elmhurst College and now Northwestern University. After graduating from the Northwestern MSC program at age 59 in 2013, he became the first president of the MSC Alumni Association.

At what point did you enter the program and why was this the right time for you?

After I came back from living abroad in 1998 and was working in Chicago, Elmhurst and Evanston for more than a dozen years, it was time for me to do something I always wanted to do: get a Master’s degree to learn and in order to be able to teach.

I came to Northwestern with a plan: to swim in a bigger pond working at a larger research university, to do things I hadn’t done yet in journalism, to get my masters, and to teach at Medill School of Journalism. I originally thought, “Am I too old to do this?” While younger people in my cohort  were quicker with technology I brought much more practical experience, and we were able to learn a lot from each other that way. I learned as much from my cohort, in some ways, as I did from my professors.

Why was Northwestern MSC the right program for you?

Out of all the programs I looked at, the MSC degree stood out, because it had so many interesting courses. I shopped around for programs, but I realized everything I was looking at had something to do with communication. The MSC program was a way to look at the best that was known and thought in the world about communication.

In the 33 years I was working in print journalism, technology changed everything.

It’s common to learn about communication only from the little perch of one’s career, but my professors looked at it in an academic context and most importantly, a global context, and kept up with the changing world. I was so enamored with this degree, my cohort, and professors, that I was so excited to go back to school at age 58. The program made me a better teacher now at Medill.

What is something you’ve learned that has made an impact on your professional and/or personal life?

I took a course about managing information for innovation, which became extremely valuable to the work I do. Our final project was to apply this to somewhere in our lives. An MSC colleague and I interviewed everyone at my Northwestern office and did a report on how to bring more innovation to the office and make people completely open to new ideas. We learned how to best nurture new ideas, be more creative, and encourage our employees. I applied some things we learned in class into our report on how we do things in this office. I found now that I’m a better manager because of this class and others. Instead of being closed to new ideas, I’ve learned to say “yes, and?,” not simply “no.” I also observed how my professors taught, to learn effective teaching strategies for current Medill classes I teach.

What was your favorite aspect of MSC at Northwestern?

It made me understand the big picture of communications, the business world, and my own profession and job here at the Northwestern. They teach you the best that is known and thought in the world, the latest cutting edge technology, why communication is important, how to communicate well, the best practices, how to think strategically, and how to lead. It’s not just communicating one on one, but it’s also how to gather all those ideas and knowledge you take in, keep them in mind, and think about what message you want to take out there on the road.

What advice would you have for anyone considering the MSC program?

If you’re interested in communication, leadership and strategic thinking, and want to understand a very complex media world that is changing every nanosecond and how to navigate in that world, this is the program for you. If you’re strictly interested in business school, this is not the program for you. The difference between the MSC and an MBA is that the MSC is more broad and will teach you those necessary skills about leadership, but also more broadly about the communication landscape in 21st century. You can get bits of many other programs through the MSC, but it’s much more than that.

We are in an age where communication is all the more important. We live in an era of fake news and alternative facts, which makes it even more important to understand the tools of communication and how to use them effectively to cut through all of the noise and get your strategy and message out there. It’s a great program for that — thinking and navigating in a complex communication world.

Can you talk about the value of the MSC network and whether you’ve been able to keep in touch?

The class of 2013 was a very tight cohort, and the idea for an alumni association came about after we graduated. We wanted to create an alumni association to create the same cooperative, collaborative affinity as we had with our cohort. In March 2015, I became the first president of MSC Alumni Association, and now am co-chair of mentoring panel for the MSC Alumni Association. I have had a number of meetings with current students or fellow alumni who are interested in getting involved in networking for future career purposes.

We host a lot of events. We just had MSC Professor Jason DeSanto speak to us in an extraordinary two hour lecture. No one wanted to take a lunch break, but instead we all wanted to keep asking questions. That’s just one example of how much the program energized me and the different cohorts, to the point that some of us would’ve gone into a PhD program if they offered one.

I stay in touch with three quarters of all the 84 people in my cohort. Every year I hold a tailgate party for our 2013 alumni. The MSC Alumni Association has made staying in touch both among cohorts and across cohorts much more doable. We often have an event in which alumni are invited to be panelists and to network with current students, which helps connect the different generations.