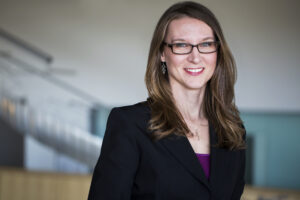 When Jennifer Judge Hensel ’19 first began her career journey, her heart was set on journalism. But, as she helped tell stories for student newspapers, she discovered a new passion: graphic design and layout. “I wasn’t much of a reporter, but I really liked organizing information on the page,” she explains.

After earning an AS in Media Communications, Print Media/Journalism from Pima Community College, Judge Hensel headed to the University of Arizona for a BFA in Visual Communications with an emphasis in graphic design. While in college, she worked at the Tucson Citizen Newspaper—one of two papers in town.

Because the publication printed in the afternoon, it was rarely the first to report on breaking news. At the time, online news was also starting to emerge, and many newspapers were closing down. Seeing the writing on the wall, Judge Hensel wanted to help the publication stay relevant—so she helped lead an overhaul of the 60-member newsroom to a focus on digital delivery and online content.

After eight years—and a successful transformation—she moved to Michigan and left the newspaper to pursue teaching, freelance web design, and branding work, which gave her the flexibility she wanted as her children were growing up.

Once she was ready to return to a full-time job, Judge Hensel joined the communications and marketing team at the University of Michigan College of Engineering. Her variety of experiences helped her land a web content specialist position involving web design and writing, with gradual increases in responsibility involving marketing strategy and management.

“Once I started at the University of Michigan and began to see my career grow, I set my sights on next steps and what I wanted for the future,” explains Judge Hensel. “Especially in higher ed, the higher the degree you have, the more you’re considered for administrative roles. I decided I needed a master’s degree to compete in that space.”

She wanted more than just a piece of paper—she wanted a degree that would make her better at her job. Her goal was to enroll at a top-ranked school that would allow her to earn an MS in Communication quickly—and online.

“I was suddenly managing a 24-person remote team that, up until that point, had worked in the same office together. And we were responsible for communicating around the crisis to thousands of people. This degree helped me weather all of that.”

“I watched peers go through being full-time parents and full-time workers while taking years to get a master’s degree,” she says. “I didn’t want to put my family or myself through that, so I was looking for a program that was super flexible. Northwestern is one of the few that does this—and does it well. Their focus on diversity, equity, and cultural competency also aligns well with my values and what my employer believes.”

Shortly before beginning the MSC Hybrid Leadership Program, the University of Michigan College of Engineering promoted Judge Hensel to executive director of communications and marketing. Starting on Day One, she began using what she learned in class on the job—from strategic planning to inclusive leadership. Northwestern’s emphasis on the science aspect of the MS in Communication degree ensured that she not only knew the “how,” but also learned the “why” behind her work as the voice of the college. Not too long after graduation, COVID-19 hit.

“I was suddenly managing a 24-person remote team that, up until that point, had worked in the same office together. And we were responsible for communicating around the crisis to thousands of people. We’ve now been in constant-crisis mode for eight months in addition to our normal jobs—plus doing everything remotely. This degree has helped me weather all of that. It’s also prepared me to shift my mindset into ‘long-term mode’ so we can think about refining collaboration, re-evaluating communication channels, and finding ways to make adjustments.”

In addition to the relatable and actionable curriculum, Judge Hensel also found unexpected value in the relationships she built with her cohort. Working alongside other professionals to finish the degree together helped her build lasting connections.

“I remember the first in-person residency,” she explains. “I was thinking, ‘I’m just going to earn my degree and move on.’ And I remember the team at Northwestern saying, ‘You’re going to leave this weekend not only knowing everyone in this room but also loving them all.’ It sounded crazy at the time, but it turned out to be absolutely true.”