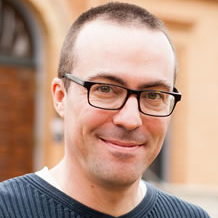 A specialist in animation and experimental filmmaking, Eric Patrick has worked as a commercial animator in Los Angeles and New York City. His animation for the program Blue’s Clues on the Nickelodeon network was nominated for several Emmy Awards and received a Peabody Award. His own independent animated films include Stark Film and Ablution. Patrick’s work has been shown in film festivals all over the world, including the International Film Festival of Rotterdam, the Fajr Film Festival in Tehran, Animac in Spain, and the Black Maria Film Festival. Currently he is working on a film titled Retrocognition that is funded by the Guggenheim Foundation.

Contemporary society is inundated with visual messages. Aside from the pervasive images and icons used in advertising, visual information permeates every aspect of our lives (from politics, fashion and architecture to data, computers and the domestic objects that require our daily use). While visual information in society has become more prominent in the digital age, many
of the methods for communicating visually remain the same. Visual Communication uses a set of universal principles to effectively communicate through the design and layout of images and data. Through the study of Design, Cognitive Science, Cartography, Human Machine Interface, Typography and semiotics, this class will study the ways that we perceive visual messages, how we interpret them, how to create them for a variety of purposes, and how to problem solve visually.