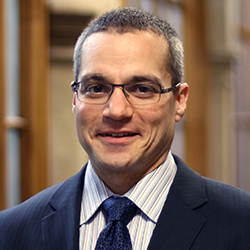 Jason DeSanto, Esq., is a graduate of the University of Pennsylvania Law School, where he was an Editor of the University of Pennsylvania Law Review, an H. Clayton Louderback Legal Writing Instructor, and the winner of the George Schechtman Prize. DeSanto brings years of communication experience in the fields of law, government, and politics – spending more than a decade as a political speechwriter, debate strategist, and communications adviser. He has written for United States Senators and members of Congress, and he has served as a litigation partner at Chicago’s Freeborn & Peters LLP, specializing in cases implicating the intersection between speech and law, including defamation and First Amendment controversies. DeSanto teaches Persuasion in the MSC curriculum with a focus on language, leadership, and persuasion. A graduate of the Second City Conservatory he also periodically appears as a political satirist and commentator on Chicago radio. He has appeared as a First Amendment expert on national radio, acted as Special Assistant Attorney General of Illinois, and served as an English teacher in the former Czechoslovakia during that country’s first year of post-Communist governance.

This course is an exploration of the ways in which communication can be more effectively used to exert influence and to exercise power — bringing together a variety of disciplines including rhetorical analysis, leadership theory, composition, speechwriting, and public speaking. The goal is to help students understand how the beliefs and behaviors of decision-makers and publics can be influenced by effective communication.