Professor Noshir Contractor shares new research and insights about networking during COVID and ideas on what to keep in mind as we return to work post-pandemic.

Shortly after 9/11, Lauren Pedi ’19 stopped at her local hospital to ask about volunteer opportunities. She had recently moved from Detroit to Chicago—where her family was from—to work full-time at an architecture firm.

She was thankful for the job, given the current climate, but felt like something was missing. Maybe spending time in a medical setting would satisfy her desire for rewarding work. 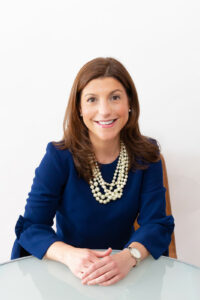 Instead of becoming a volunteer, however, she ended up meeting someone in the development office. Shortly after, Pedi landed a job at Advocate Illinois Masonic Medical Center as a development coordinator—and she loved it.

“I learned a little about everything,” she says, “from major gifts fundraising to event planning and stewarding donors. So much was transferrable from my time as a communication major at University of Michigan-Dearborn because so much was about relationship building and connecting with people.”

Four years later, she joined Lurie Children’s Hospital of Chicago to work with volunteer boards and fundraise for special events. At the time, the hospital had just announced plans for a 22-story, state-of-the-art medical center, slated to open in 2012: Pedi would be part of the team tasked with raising $600 million for the campaign.

“It was a really fun, rewarding, and memorable experience. We worked hard. We played hard. We had 30 events in 30 days, and we loved every minute of it,” she says. The experience also solidified her desire to use her skills to support groundbreaking work in healthcare.

In January 2014, Pedi left the team to move into major gift fundraising; she joined Northwestern’s Feinberg School of Medicine to raise money for the Institute for Translational Neurosciences and its work on Alzheimer’s, Parkinson’s, and ALS.

“I knew the fundamentals would not only help me in my job today but also in the rest of my career—no matter where I went.”

As she helped support this research, she decided it was time to explore a master’s program. After talking to colleagues, doing research, and attending information sessions, she discovered Northwestern’s MS in Communication program.

Pedi admits she was scared to return to the classroom after being out of school for nearly two decades, but her “colleagues spoke very highly of it,” she explains. “As a one year program, it seemed very approachable. And I knew the fundamentals would not only help me in my job today but also in the rest of my career—no matter where I went.”

Earning an MS in Communication gave her the opportunity and the confidence to put her skills to the test. For starters, she purposely chose an elective that she knew would be uncomfortable—but would pay off in the end: Professor Paul Arntson’s Leadership & Decision-Making class.

“You’re videotaped as you lead a group through a decision-making process based on an analysis of a business case study,” she explains. “Then you and the members of your team go back and evaluate how you did. When I first heard about it, I didn’t think I could ever do it. But I joined the program because I wanted to learn and push myself, so I decided to go for it.”

That confidence carried over into her work, too. While at the Feinberg School of Medicine, Pedi had agreed to share what she was learning in the program and lead the charge on a new project: finding meaningful ways to engage donors. After coming up with a plan, she took her team’s proposal to senior leadership and they moved forward. “I had the confidence to lead this small group through this process and present our ideas to leadership because of the experiences I had during the program,” she explains.

As graduation approached, Pedi planned to take a few months off and re-evaluate next steps. But after lunch with a former Lurie Children’s Hospital colleague, she learned about an open fundraising position within the neurosciences program.

Today, Pedi still reaps the benefits of her MS in Communication. Working with doctors, scientists, administrators, and donors, she says her job can be challenging as she breaks scientific and medical information into understandable messages to motivate donors.

“The program gave me the confidence to ask questions and probe deeper with doctors and scientists to get at the heart of their work and how it translates into something meaningful for donors,” she says. “It helps me do my job more effectively and successfully.”

Join MSC Professor Mike Roloff as he shares some research around remote work before and during the COVID-19 pandemic and talks about implications for remote workers in the future.

Insights on the Application Essay

For One Communication Pro, Timing is Everything

Growing up in an Iowa farm town, Mia Roberts ’19 couldn’t have imagined the opportunities waiting for her after graduating from Graceland University: managing magazines for the Women’s National Basketball Association, working for the Olympic Games in Atlanta and Sydney, and helping Encyclopedia Britannica transition to digital content. 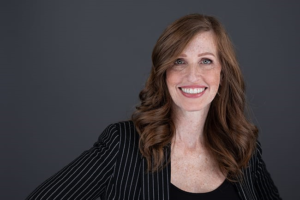 The desire for a master’s degree was always in the back of her mind, but the opportunity never seemed to come at the right time.

Shortly after applying to Columbia University for a Master’s in Journalism program, for example, she received a job offer in Sydney and had to decide: move to Australia to work for the Sydney Olympics’ Internet Business Group or go to New York for a graduate degree?

“At the time, I chose to continue my career,” says Roberts. “Living in Australia was a dream. My path so far has been a series of happy accidents—being in the right place at the right time. I’ve had wonderful opportunities and experiences, and I’m very grateful to the people who helped me along the way.”

When she began her family in the early 2000s, she steered her career path toward flexible opportunities that also called for less travel: working for the YMCA of the USA, a group publisher for the Olympics, Feeding America, and the American Egg Board.

A few years after being diagnosed with and recovering from breast cancer, Roberts left the American Egg Board to focus on her family for a year—and decided it was finally the right time to think about her master’s degree.

“The goal of earning a graduate degree had always been there,” says Roberts. “At one point, I even took a few classes at the University of Chicago to begin my path to an MBA. Beating cancer brought into sharp focus the idea of unfinished business—and my master’s degree was one of those things. This time, it was right. I decided to do it.”

Roberts wanted a professional refresh to realize her professional goals, such as taking on additional leadership opportunities. She also wanted to learn more about managing communications complexity, which led her to Northwestern’s MS in Communication Hybrid Leadership Program.

“My job is to stay ahead of industry initiatives and find companies that want to work with us in bringing those initiatives to life. I feel even more prepared with my MS in Communication to face these challenges and lead our members through them.”

“I remember my first day and a discussion about intellectual praxis and fulfillment through deeper levels of understanding,” says Roberts. “That really resonated with me. As soon as I heard that, I knew I was in the right place.”

For Roberts, Michelle Shumate’s Foundations of Strategic Communication Management course was a great way to kickstart the program, beginning with the creation of a stakeholder salience model to better understand who stakeholders are, how they’re legitimized, and how to communicate with each of them. “That exercise blew my hair back. At that point, I knew there was so much more to learn.”

The focus on personal branding throughout the program helped her learn to effectively convey her strengths and weaknesses and communicate the value of her experiences. “After decades of working, you’d think you’d have this stuff down, but it’s an ever-evolving conversation about the benefits you can bring to an organization,” she explains.

Concepts of diversity, equity, and inclusion woven into the curriculum also helped Roberts develop the confidence to critically and respectfully challenge and interrupt norms. “I thought I was educated and enlightened, but everything I learned—and continue to learn—is giving me a much deeper understanding of what it means to be inclusive, equitable, and diverse in terms of thought, age, race, gender, and religion. I give all credit to the program for helping bring me along in this area.”

In February 2019—a few months before graduation—Roberts became the director of partnerships and industry affairs for the National Restaurant Association. In this role, Roberts focuses on creating industry partnerships to protect and promote the restaurant industry while helping members find new ways to drive business during and after the pandemic.

“My job is to stay ahead of industry initiatives and find companies that want to work with us in bringing those initiatives to life,” she explains. “I feel even more prepared with my MS in Communication to face these challenges and lead our members through them.”

MSC Alumni in the Consulting Industry Discuss Their Careers

Listen in as three MSC alumni talk about their career in the consulting industry and give advice to anyone interesting breaking in into consulting.

Dr. Michelle Shumate talks to us about what it takes to make a memorable first impression.

Watch as three recent graduates of the MSC Hybrid Leadership Program talk about their experience as students and how they have leveraged their new knowledge in the workplace.